The transition from a linear economy towards a circular economy is – in light of the increasing scarcity of finite materials and resources – urgent. This transition calls for collaboration between actors within circular production chains – such as waste stream producers, distributors, processors, and purchasers – as well as actors surrounding these chains – such as knowledge partners, financers and policy makers. Each of these actors brings a different set of capacities and capabilities to the table, has different responsibilities and authorities, and strives for different goals and values, thereby complicating collaborations.

Our research shows how each building block is either missing or lacking. Oftentimes little social capital exists between the different actors, and it is found difficult to bring the relevant actors together to build this. Moreover, waste management in The Netherlands has a history of misconduct and scandals, which resulted in a strict, bureaucratic, risk-averse waste management system that complicates collaborations. To make matters worse, different governmental departments and organizations seem to be counteracting one another, resulting in confusion and frustration among the different actors. And finally, leadership that creates the conditions for and stimulates collaborations is currently lacking.

All in all, the basis to collaborate towards a circular economy is shaky. Oftentimes it is said that this is caused by ‘linear rules and regulations’, or ‘insufficient eye for the collective interest’. This research, however, shows what is behind these claims, and, more importantly, that it is a combination of factors that currently frustrates circular collaborations. Therefore, solutions that seek to smooth collaborations should address these factors altogether. 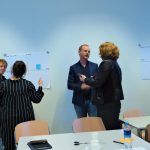 Right to Cooperate – From Right to ReasonProfessional